Shakespeare’s famous play Hamlet will be performed in Nuku’alofa on Tuesday, June 23 by a London based company, Globe to Globe Hamlet tour.

The performance will be held for two and a half-hours by eight actors at the Tonga National Cultural Centre by the small scale production which has toured the United Kingdom and United States in 2011-12.

Tourism Tonga said they will perform a raw, thrillingly elemental production of this inexhaustible play.

“It has a fresh version of Shakespeare’s classic tragedy of deferred revenge that emphasizes the play’s gallows humour and celebrates the exuberance and invention of its language.”

Tonga is one of 205 countries on the tour, which has to date performed in 96 countries.

Dominic Dromgoole, the Artistic Director said the tour was created with the aim of performing Hamlet to as many people as possible in as diverse a range of places as possible.

The central principle is that Shakespeare can entertain and speak to anyone, no matter where they are on earth, he said.

The tour has been awarded the UNESCO patronage in recognition of its tour engagement with local communities and promotion of cultural education. It also received the International Award from The Stage Awards in January this year.

The performance will be held before the start of the Coronation celebration on 27 June, and tickets may be purchased at Tourism Tonga. 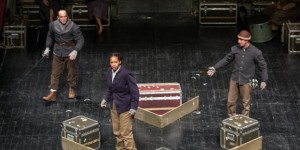